Tiny village between Nyngan and Bourke 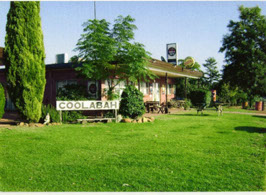 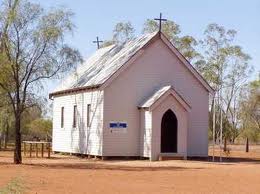 Victoria Cross recipient Arthur Hall was a local Grazier - he is buried 25kms from Coolabah on the 'VC Hall Way' at the West Bogan Church.

The tiny village of Coolabah lies on the Mitchell Highway 76 km north of Nyngan and 656 km northwest of Sydney. The village is now nothing more than a few houses. However this disguises a history interesting enough to have produced a substantial local celebration when the town held its centenary in 1984.

The village grew as a result of the establishment of the railway station on 2 September 1884. The railway, slowly pushing north to Bourke, was an attempt by the NSW Government to gain economic control over these northern outposts (most trade at the time was going down the Darling River to South Australia) and to serve the ever-increasing population on the large grazing properties in the area.

The town took its name from a nearby property called 'Coolabah' which had been named after the coolibah trees which grew in abundance in the area. It was named by Louisa Poplin who was the wife of Albert Poplin who owned the property.

The first building in Coolabah was, appropriately, the Railway Station which still stands a forlorn reminder of the promises that the rail offered to outback areas in the late nineteenth century.

Shortly after the Railway Station was completed a merchant named Charles Werner, who subsequently became a wealthy and prominent member of the community, built the 'Three Legs O' Man' Hotel. Cobb & Co coaches brought passengers to the railway junction and changed horses at the hotel's stables. Werner, who died in 1914, is buried in the local cemetery.

The town slowly grew and, at its peak, it had a population of 300 people. Today there are fewer than 30. Its one claim to fame is that, due to a lack of reliable water, it once boasted the largest well in Australia. An extraordinary structure measuring 30.8 metres across and 13.9 metres deep. The well operated as the town's major water supply.

Today, the town relies on farming and passing tourists along with further afield industry such as the Girilambone mines to sustain the small population.

The historic inland coaching company, Cobb & Co, celebrates the 150th anniversary of its first journey in 2004 (and the 80th anniversary of its last, owing to the emergence of motorised transport). The trailblazing company's contribution to Australia's development is celebrated with the establishment of a heritage trail which explores the terrain covered on one of its old routes: between Bathurst and Bourke.

Cobb & Co's origins lay in the growing human traffic prompted by the goldrushes of the early 1850s. As the Heritage Trail website states: 'The company was enormously successful and had branches or franchises throughout much of Australia, New Zealand, South Africa and Japan. At its peak, Cobb & Co operated along a network of tracks that extended further than those of any other coach system in the world ¬ its coaches travelled 28,000 miles (44,800km) per week and 6000 (out of their 30,000) horses were harnessed every day. Cobb & Co created a web of tracks from Normanton on the Gulf of Carpentaria and Port Douglas on the Coral Sea down to the furthest reaches of Victoria and South Australia ¬ in all, a continuous line of 2000 miles (3200km) of track over eastern Australia from south to north, with a total of 7000 miles (11,200km) of regular routes' 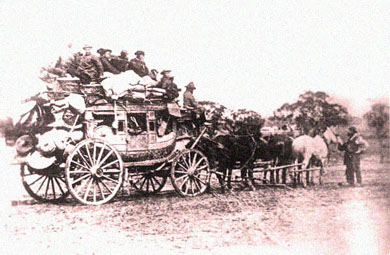 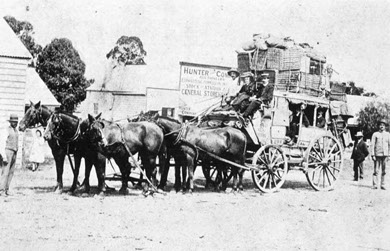 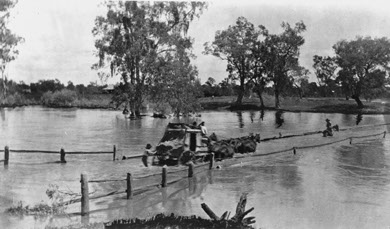